After years of struggling with procrastination, I found a way to be productive

First of all, I would like to specify that this post is coming from my perspective as a software developer, it is a bit biased but that can be ignored by replacing software terms / activities with anything else in your area of expertise.

A few weeks ago, I randomly woke up at 3 am and thought of a way to organize my life each year in order to focus on personal growth and accomplishing goals. This idea came to me after reading and being inspired by Marc Andreessen’s blog post from 2007 about personal productivity. It’s 2017 now and I’ve said to myself: “what do I want to accomplish this year? where will I be when 2017 is over?”. Those kind of questions are really hard to come and answer if you’re an avid procrastinator.

So, I began scribbling a system on my old agenda that would satisfy my needs, without making me feel bad if I procrastinate and without weird habits that only screw with your brain. Here is the first draft on paper along with the final version from Evernote (there are a few words in romanian, I apologize): 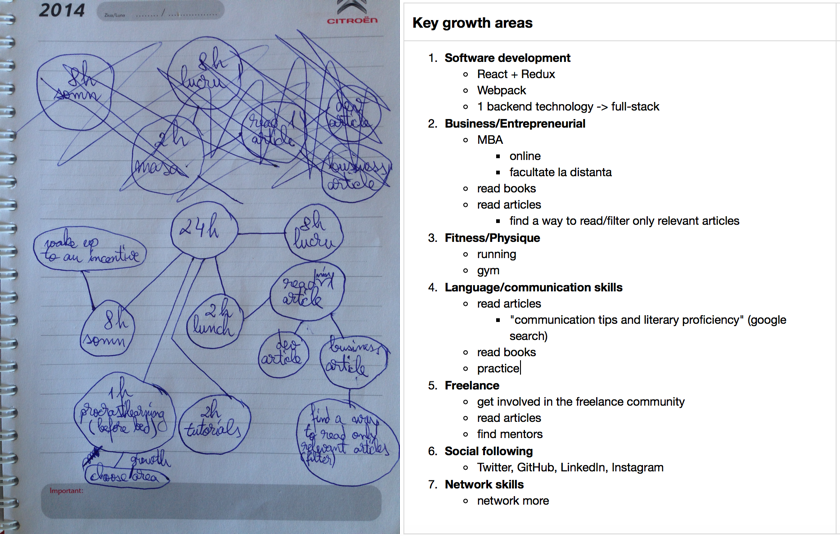 As you can see, I’ve made of list of areas where I want to see myself grow and I called it Personal Roadmap. This helped me realize that if I wanted to become better in those areas, I seriously needed to focus my time on improving them and by procrastinating I was just injecting another year of mediocrity into myself. Every time I wanted to go on Facebook or watch something useless on YouTube, I said to myself: does this help me grow and make me the person that I want to be when 2017 is over? I’ve combined this thought with a nifty Chrome extension that blocks time-wasting websites called StayFocusd. After a couple of weeks of using it, I formed a habit and I don’t tend to go on Facebook or YT so often anymore. Now I don’t even use it anymore.

I also thought that it was okay to procrastinate here and there, as it is a normal thing and we shouldn’t feel bad for doing it, it’s just our brains telling us to have a break and do something mentally easy. Don’t get me wrong, it’s okay to procrastinate as long as you don’t go overboard and spend the whole day doing it!

The next thing I did was think in time. What do I mean by that? Well, we have 24 hours a day to do whatever we want with, so I began to calculate what I do each hour and see where I waste the most time and where I could be the most productive. This really helped put things into perspective for me. I then came up with a simple schema to visualize a usual day of my life. There were more complex versions of this but being a minimalist I’ve settled on having a simple mind map.

As you can see from my schema, I am spending 10h on sleep (give or take) and 9h on work (give or take) while approximately 3h are wasted every day on commuting, doing house chores and other things of that nature.

You might wonder what procrastilearning is though, right? I know it sounds stupid but let me explain. The whole principle of my system is to ensure that I am not holding myself extremely accountable for procrastinating, otherwise it won’t work because I’ll always feel bad. What I did instead is, I thought of the most common times I procrastinate each day and I replaced those times with an activity that involves both procrastinating and doing something productive. That can’t be done, right? Yes it can, why not read an article on how to do something in a programming language of your choice instead of reading an article on “21 things you’ll never believe happened to Kim Kardashian”.

Basically, what I do when I feel the need to procrastinate is, I go to my growth areas list on Evernote and choose something that I would enjoy doing at that time, then I find an activity related to that, which I find useful, easy and enjoyable and I do it. For example, last night I wanted to procrastilearn and I chose the first thing off the list, which is learning Software Development, more specifically learning React. I then went on to Google and searched for interesting React components and I just fiddled with them, it was enjoyable and I learned stuff from it.

I also didn’t put very strict rules in place as that would have made me feel trapped and forced and I would have quit after a couple of days. Instead, I slowly ease in to my new schedule and it’s working great so far. Why not waste 2 weeks doing it gradually and actually having it work instead of doing it cold turkey and quitting after 2 days? See my point? I’m slowly putting more stricter rules into place and slowly forming habits, and by not doing it all at once has helped me tremendously.

That concludes this post. I hope that you found it useful and that maybe it will help you if you’re a procrastinator like I am. If you want to try this system and have any questions, don’t hesitate to contact me as I’m always happy to help.